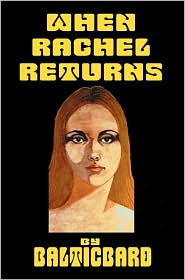 The book has a thinly plausible plot - girls meet, girls get together, girls separate, years later girls rediscover their true love for each other.  That's where the believability of the book ends.  Ann Williams goes to the Division of Motor Vehicles to renew the tag on her car and finds herself standing in a long line that isn't moving.  Rachel Stone, who manages the office, propositions Ann to get her paperwork processed quickly if Ann will have lunch with her.  During lunch they realize they have fallen madly in love with each other, despite the fact that they've never seen each other before and Ann, up to that point, has been straight all her life and has a fiancée waiting for her.

Their affair lasts for about two years until Rachel decides Ann is boring and runs off with a younger woman.  Ann's old fiancée takes her back and they live happily until he dies in an accident.  Meanwhile, Rachel's girlfriend cheats on her, runs off and devastates Rachel so badly she becomes a derelict drug/alcohol addict on skid row.  One day Rachel sees a story on TV about Ann's husband, then immediately decides to fix her life and go reclaim Ann's love.  Rachel travels to the university town where Ann teaches and is hired to be Ann's secretary.  Another professor who is married is chasing Ann, but his wife is a lesbian and they have an "arrangement."  This story only gets more bizarre.  Before the end, the lesbian wife makes a play for Ann; hires a hitman to kill her husband, but nearly kills Ann instead; Ann takes Rachel back; and the lesbian, her husband and another female professor end up living together.  Throw in some more unbelievable characters and situations and you have this book.

This is a story that first appeared online and then was published by the author.  That is the problem with self-publishing.  There is no one to tell you to forget it and not waste your money on a project like this.  The dialogue is poorly written, there are many printing mistakes and the story itself is totally unbelievable in many parts.  It is almost impossible to find something redeeming about this book. This is one that is better left unread.