Once by L.T Smith 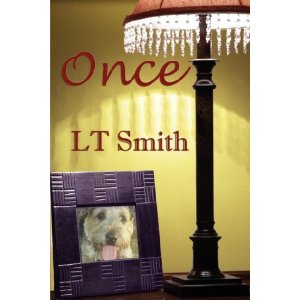 Relationships can be very damaging.  If your partner tells you you're unattractive and leaves you for someone else, it tends to make you believe her words.
Beth Chambers knows exactly how that feels, only her experience was worse because she found her lover having sex with another woman as if to emphasize the point.  Beth isn't sure she'll ever trust another woman, but that's OK because she has Dudley.  Beth may have no self confidence, but she knows Dudley loves her unconditionally.  After all, that's what dogs do.  Which is why, when Dudley gets away from her one day during his walk and Beth is sure he's chased his ball right into the river, she doesn't hesitate to plunge into the icy water fully clothed to save her friend.  That's where Amy Fletcher finds her.  Standing in the middle of the river, soaked to the skin, crying desperately as if her world has come to an end.  Amy has only gone there because the handsome little dog with the ball in his mouth that ran into the café where she was having coffee was insistent that she follow him.
In Beth's eyes, Amy has it all, beauty, personality, a good job, she's everything that Beth isn't.  They might be friends, but nothing else could ever come from them spending time together.  Even when the friendship begins to show signs of something else, Beth can't believe that she's worthy of someone like Amy or ready to trust herself in another relationship.  What she doesn't know is that Amy has been hurt also and needs Beth just as much.  It begins to look doubtful that the women will realize what is happening between them, but never underestimate the power of Dudley.

Once is a nice story about two women trying to learn how to trust again.  It has a lot of natural humor in it, which makes its biggest weakness stand out even more.  At times Smith tries to push the humor too much, Beth comes off as being almost too "cute" to the point of irritating.  Smith needs to let her characters tell their stories and go with the natural flow of the tale without forcing it.  When she does that, she's quite successful.  Developing Amy's background more would have given her character more depth, but the book is definitely supposed to be predominantly about Beth.
This is a story many women will be able to relate to.  They have been hurt by the actions of someone they thought they were close to and looked for some fault in themselves to blame.  Beth and Amy are sympathetic characters and their struggle to believe in each other has a ring of reality to it.  They almost lose everything because they are afraid to say what they feel and take a risk, which is a situation many have experienced.

Once isn't a romance loaded with sex scenes, but it can be an enjoyable afternoon or evening spent watching these women work out their feelings.  And then there's Dudley the scene stealer.  Two lesbians and a cute dog.  It's pretty difficult to go wrong with that.
Posted by Lynne Pierce at 5:15 PM