The Qualilty of Blue by Valarie Watersun 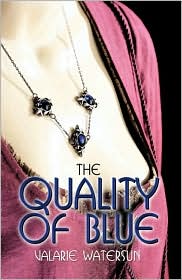 Jewelry designer River Tyler believes she has started a new life when she moves from a small community in Virginia to live in the Florida Keys.  Her parents, who she describes as aging hippies, have been supportive, but also smothering.  River hopes that by becoming the manager of Designs by Deidre, where she will design individual pieces of jewelry, she will have a chance to experience a few things in life.  What she doesn't count on is meeting Larken Moore, the charismatic woman who buys gems and stones for the company.  Larken seems to like and get along with everyone, except River.  Larken believes that River has her job because of her ties to Simon Minorca.  Minorca is a financial backer of the store and is reputed to have ties to organized crime and Larken assumes that River is his latest mistress.  Despite that, she can't help but feel drawn to the innocence that she feels coming from River.  As the two women are attracted more to each other and begin to fall in love, they know they will have to deal with Simon, but neither can imagine what he is willing to go do to get what he wants.  Eventually there is a confrontation which threatens all of their lives.
There is a good framework to this story, but it needed more definition.  Everything passes too quickly without any development.  There are a number of areas where the story should have been expanded.  The relationship between River and Simon before she arrives in Florida is unclear; therefore, the incidents that occur between them seem rushed and incomplete.  Larken mentions the difficult conditions she has to endure to obtain the gems for the store and a further description of what she goes through would have expanded the story in an interesting manner.  It would have been particularly informative to read about her efforts in troubled nations to obtain what are called "blood gems," those produced by slave labor in order to finance wars.  And the final scenes between River, Simon and his rather bizarre mother just don't seem realistic.  This book reads like a first draft of a story that an author typically goes back over and fleshes out with more detail.  Only the details aren't there, so the book is very superficial.
This isn't a bad book.  It's just a very ordinary story.  Be prepared though to wish that there had been more to it.  This seems to be a book that you can read, enjoy for what is there and then forget about.
Posted by Lynne Pierce at 6:20 PM