The Seduction of Moxie by Colette Moody 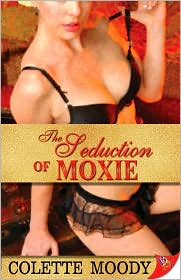 The Seduction of Moxie is set in 1931, in a world that teeters between the wild days of the 1920s and the weariness of the Great Depression. Violet London is an actress preparing to leave for Hollywood and her friends take her out for one last night on the town in New York City.  This is when she meets and is captivated by Moxie Valette, an attractive singer in a speakeasy.  After a night of hard partying and even harder drinking, Violet leaves for California, but she is determined to find a way for Moxie and her to be together.  Eventually, Violet returns for Moxie, enticing her to move to Hollywood with the offer of a movie careers.  A train trip west gives them a chance to reconnect and they enter the movie community with the promise of bright futures for both of them.  Hollywood has its own wild side, but is it wild enough to accept starlets who are revealed as lesbians?  Is the relationship between Violet and Moxie strong enough to sustain them or will the lure of fame be more than they can resist?

Moody certainly captures the spirit of the age when people visited speakeasies and violated the Prohibition laws with little regard for the consequences.  The life of the "beautiful people" was fast paced, pleasure based and mostly irresponsible.  The fact that most of the characters in this book don't realize they're balanced on the precipice of disaster speaks to their shallow natures.  That is part of the problem with this book.  If it had been set in 1927 the mood would have been perfect, but it takes place in 1931.  That's two years after the stock market crash, yet none of the characters make any reference to it or seem to be having any financial problems.  They seem to live in a vacuum totally disconnected from the rest of the world.  The other problem with the book is the dialogue.  Flapper-type women were very open, but the words that spew out of these characters' mouths just don't fit.  The profanity and explicit sexual talk that they use might be common in some places today, but it certainly wouldn't have been in the 1930s, especially out in the public.  These characters don't seem to have any kind of censor on what they say and they most certainly would have in that period.

One unusual addition to the book is an appendix with recipes for cocktails, many of which are featured in the story.

The Seduction of Moxie is a patterned romance with interesting characters.  Enough famous names and details are scattered through it to give the story a period tone.  Some work could still be done on making it more authentic, but that probably won't get in the way of the casual reader.  If you're looking for a fun romance to pass the time, this one fits the bill.  If you hope to learn some accurate history, be careful what you take away from it.  If you have a problem with profanity and explicit sexual references, this book may make you uncomfortable.