The Illusionist by Fran Heckrotte 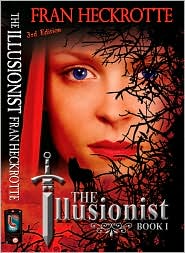 
The Illusionist is a good example of a book where everything happens too quickly.  There is the good basis for a story, but there are a lot of holes that needed to be filled in to help the reader understand what exactly is going on.  Heckrotte plans a sequel and may have wanted to hold back some secrets for that book.  The problem is there are questions that should have been answered in this book to increase the reader's comprehension of the story.
Yemaya Lysanne is The Illusionist.  She performs around the world astonishing people with what she is able to do.  What her audience doesn't know is that she is exerting power and control over them that they don't realize.  Dakota Deveraus is an investigative journalist who is trying to uncover Yemaya's secrets.  She thinks she's been hired to do an expose on people who perform stunts and doesn't realize that she is actually the tool of a powerful CEO who wants to control Yemaya's power.  The two women are quickly drawn to each other, so there is no hesitation when Yemaya invites Dakota to accompany her back to her homeland Moldova.  This is an actual country that lies between the Ukraine and Romania, generally in that area more famously known as Transylvania.  When Dakota arrives, she discovers a county true to the stereotypes – thick fogs, mysterious houses, and villagers totally loyal to Yemaya and her brother Raidon, who are treated like the ruling royalty.  There are also wolves that have a connection to Yemaya and serve as her protectors and assistants.
Agents working for the CEO have followed the women home and there is a madman stalking the village, not to mention various spirits and old gods who come to play a part in the story.  Amidst all of this, plus death threats and attempted kidnappings, the two women find themselves falling in love and discovering that they are soul mates.  The question is if they can survive all of the forces attacking them to establish a life together.
Yemaya and her brother are definitely not human (they say so themselves) and she can communicate directly with the wolves, but it's not clear exactly what they are.  The villagers seem typical of what appears in the Frankenstein and Dracula stories, but they see the Lysanne's as protectors against the monsters, not as the monsters themselves.  The book has a dark and mysterious tone, so you certainly expect something to leap out at you.  The spirit of Dakota's ancestor, who was a pioneer woman on the Great Plains, makes frequent appearances and provides some comic relief, but the "dialect" she speaks is nothing but irritating.  Finally, there is the relationship between the women.  They have hardly met when they realize they are totally in love and absolutely devoted to each other.  There is very little development in the relationship.
The Illusionist isn't a bad book.  There is a story to be read in it, but it needed a little more work to be complete.  Another 15-20 pages would have helped the flow of the story.  There is adventure, suspense and romance.  When you finish the book though, you'll feel like you still don't know the whole story.
Posted by Lynne Pierce at 6:16 PM