The Arcanum of Beth by Mary Jane Russell 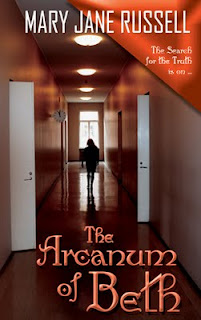 Beth Chandler has been living a very quiet life as she helped take care of her parents, but now she’s ready to spread her wings and find something to do with her life besides work as an accountant.  Her best friend lawyer Janet Evans and her partner Ellen Harris decide to throw a sort of “coming out” party for Beth, but it has unintended consequences.  One of the guests is Louise Stephens, local playgirl, who sweeps Beth off of her feet.  Janet is unhappy when Beth suddenly moves in with Louise and moves her mother in, too.  Beth seems to become progressively more unhappy, but she won’t discuss what’s wrong, so Janet doesn’t feel she can get involved in the situation.  She’ll come to regret that when things become more complicated by Beth’s brother Will and his wife Patti showing up.  Patti and Louise spend too much time together and rumors are flying.
Janet’s concern for her friend turns into anger when Beth is suddenly killed in an “accident” that seems more than suspicious.  No one knows until then that Beth gave Janet complete control over her estate and Janet has no intention of turning over anything to Beth’s family until she has checked out the circumstances of her death more thoroughly.  Janet and Ellen are pretty sure they know what happened.  The tough part is going to be finding the evidence to prove it.  Before she died, Beth whispered a clue to Janet, who is a master puzzle solver.  Finding the answer will be the solution to the arcanum of Beth.

The Arcanum of Beth is a different type of mystery.  There’s never much doubt about what happened to Beth.  The trick to the story is having Janet collect the evidence against two opponents who are very wily without having an “accident” herself.  Russell has to be given credit for having the courage to kill a very sympathetic character.  She spends a lot of time getting the reader to invest in Beth finally finding some happiness for herself and then goes through with the murder.  Though the reader knows from the blurb on the back of the book that this is going to happen, there’s still the hope that somehow the inevitable will be avoided.  Many writers won’t kill a strong character and end up weakening the story.  This is a bitter sweet story that is sometimes difficult to read for that reason, but it also makes it stand out from the crowd.  There are some parts of the story that seem a little contrived, but not enough to interfere with reading it.

The Arcanum of Beth is a promising first novel from Mary Jane Russell.  It’s worth reading for several hours of entertainment and it will be interesting to see how Russell develops her talent in future novels.