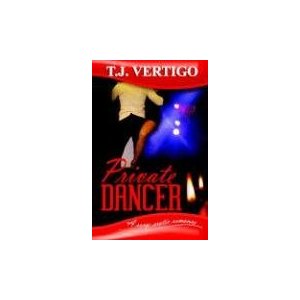 Private Dancer is the story of Reece Corbett, who runs a gentleman's club (read strip joint), Cori, one of the dancers and Faith Ashford, a wealthy woman whose family disinherited her when she decided to become an actress in New York City.  Reece has led a hard life and seen her share of trouble.  If she had not been taken in by the man who once owned the club and used her as his enforcer before his death, she probably would  have spent the rest of her life locked up in a prison somewhere.  Except for Cori, who has managed to penetrate her protective shell, no one means anything in her life until she meets Faith.  Faith may be the person Reese has been looking for to complete her life, if she can find the ability to trust her.

Private Dancer is a disappointing book for more than one reason.  The plot is exceptionally thin and reminiscent of Therese Syzmanski's Brett Higgins series, except this story isn't told as well.  There is absolutely no depth to these characters and their relationships with each other are, at times, extremely confusing.  Reece is not a character to be admired.  She thinks nothing of using women and discarding them like used tissues and, if you believe the story, all of the women she encounters can't wait to experience this miserable treatment.  She's supposed to be a hard as nails, street-wise dyke who takes one look at Faith and becomes totally unhinged with love.
The interaction between Reece and Cori is often confusing and makes no sense.  Cori is supposed to be a poorly educated waif whose only talent is taking her clothes off.  Apparently she has a bizarre ability though to be able to understand the motivation behind any behavior Reece exhibits.  For example, Reece will do something extreme like smashing a glass and then Cori has a revelation that this is caused by some trauma from her childhood and reflects Reece's need for love and acceptance from a special woman.  What is never explained is how Cori comes to her startling interpretations of what Reece really means.  What is the basis for this understanding?
The character of Faith is the most perplexing.  She starts out as a naive rich girl who is abandoned by her family because she wants to be an actress, a story line that is never developed, is living in a terrible part of New York City without any adjustment problems and goes from knowing nothing about sex to performing some acts that might make a stronger woman blush.  And none of these women have a problem with performing sex acts in front of each other or other people.  In fact, they seem to enjoy it.  Unfortunately, the "good" parts of the book aren't enjoyable because the reader should be wondering what is wrong with these women.

A suspicion is reasonable that Private Dancer exists for the purpose of tying sex scenes together.  The author biography says that T. J. Vertigo has a web site where this story was originally posted.  As a story that is free and available on the web, it's perfectly fine.  As a book that was bought, it's not.  If you want to read the story, find the web site, save yourself some money.
Posted by Lynne Pierce at 5:25 PM