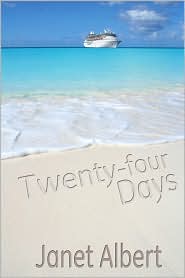 Dr. Miranda Ross is trying to recover from a failed relationship by working as a doctor on a cruise ship in the Mediterranean Sea.  She doesn’t trust anyone with her heart, especially not Jamie Jeffries the head fitness trainer who is good looking and has a reputation of sleeping with every available woman on the ship.  What Miranda doesn’t know is that Jamie’s reputation is based on conjecture, not reality.  Jamie is focused on a goal, to save enough money to open her own fitness center, and doesn’t have time to play around with everyone who makes a pass at her.  As ship activities throw them together, the women discover there is an attraction, but Miranda won’t allow herself to trust Jamie and the end of the cruise appears to be the end of their relationship.  Months later Miranda has started her own practice and realized that she made a serious mistake not pursuing the situation with Jamie.  When they accidently run into each other, Miranda is determined to make up the situation with Jamie, but she still has trouble trusting her enough to move the relationship forward.  This time Jamie also has a trust problem based on Miranda’s previous behavior and the question is whether each of them can let down her barriers enough to see what’s possible.

Twenty-four Days is a standard romance with two women trying to overcome the odds and become a couple.  It follows the formula for most romances with little deviation.  Lovers of steamy sex scenes will be rewarded with this book and for everyone else it’s an entertaining story to pass a few hours.  This probably won’t be a permanent addition to anyone’s collection, but it’s well written enough to pass an afternoon.