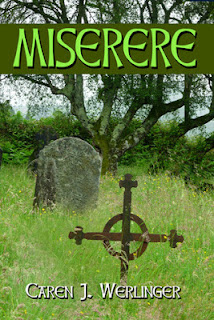 Writing about an excellent book is always difficult.  Finding the right words to convey to others  why it is so outstanding so that they will want to read it is a challenge.  Capturing the essence of a book without giving away the story is a tricky balancing act.  It would be easier to say “Mystery ….. Paranormal …..Love ….. History…..Buy it,” but that doesn’t seem to do the book justice.  Miserere definitely deserves to have justice done to it.

Caren Werlinger has constructed two parallel stories connected through time by family ties and the intolerance that people can practice towards each other.  Caitriona Ni Faolain and her sister are sold to an English nobleman in Ireland so that their destitute father can obtain five more acres of land to farm and support the family during the Great Famine.  They are sent to pre-Civil War Virginia to work on the nobleman’s estate as what amounted to white slaves.  There they make friends with the black slaves and deal with the events leading up to the war.  Eventually, Caitriona and some of the slaves are forced to flee and end up in West Virginia, where tragedy is waiting for them.

One hundred years later Connemara Faolain Mitchell arrives in West Virginia with her mother and brother.  Her father is MIA in Vietnam and they have returned to her mother’s family home to wait for further news of him.  Conn experiences visitations from her ancestor Caitriona’s ghost and learns that there is a curse on her family that only she can lift.  Meanwhile, she and her mother are not making friends with some members of the community because of their insistence on treating Negroes and other outcasts as their equals.  As Conn maneuvers through the events of both the past and the present, it becomes increasingly clear why she is the chosen one.  It’s also apparent that events and emotions separated by a hundred years are not only similar, but connected.

Miserere is an amazing book.  It moves easily between episodes from the different time periods, capturing the feelings and complexities of each era.  It addresses instances from US history that are often forgotten or that are fading from memory and makes them feel alive and in the moment.  Intolerance, ignorance and the tragic consequences of war are not unique to one period, which proves the point that history has an unfortunate habit of repeating itself.  However, it also speaks to how the chain can be broken by the actions of a few good, and determined, people.

One note to lesbian readers, this is not your typical lesbian novel.  Those who think books must contain scenes of lovers and the exclamations of feelings won’t find those here.  There are relationships, but they are gentle whispers in a story that ultimately proclaims the right of people to be different whether the differences are cultural, racial, gender related or in sexual orientation.  The book weaves an essence around the reader that draws you in and is compelling in the need to consume the story.  Connemara Faolain Mitchell may be one of the most remarkable characters created in literature period, regardless of the genre.

So what are the words to use to convince someone to try this book.  Buy it…..read it…..absorb it….marvel in it.  Hopefully, that does justice to the book.

The Midas Conspiracy by Jennifer McCormick 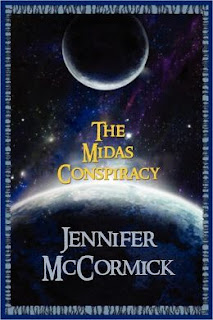 Cybil Reynard is a mercenary who can be hired for just about any job if the sum is right.  Her latest assignment is to track down two agents of the Valori race and retrieve information they have stolen from Midas Pharmaceuticals.  The Valori are humanoids that many already distrust, so Cybil has no hesitation about killing the agents if that is necessary; however, she begins to have doubts when she encounters Leara Sorani and her bodyguard Kitani.  They defy practically everything Cybil has been told about the Valori and their mission turns out to be noble.  Midas is developing a vaccine that will eliminate all races except those originating on Earth.  Instead of being enemies, Cybil, Leara and Kitani find themselves in an uneasy alliance to save the universe, an alliance where neither side really trusts each other.  Things don’t get any easier when they find themselves involved with Cipher, a type of intergalactic peace keeping group of fearsome warriors, and its mysterious leader Enigma.

This is an outstanding first novel for Jennifer McCormick.  The story is very reminiscent of what appears on television or in the movies, but she handles the genre of science fiction with great ability creating races, planets and technology that seem realistic.  The characters are appealing and lead the reader to care about what happens to them, even when they don’t behave very well.  The one true villain comes with a wicked twist to the story that is totally unexpected.  It keeps the story fresh when it might have become routine.  The only “weakness” is in the Valoir.  McCormick mentions several times that they don’t have an assigned gender.  It’s a race that can be male or female and they alter the roles during their lifetimes.  The characters she presents come on strongly as “female” though.  A few more “male” traits needed to be included to sell the description.  The story moves at a good pace though and provides enough drama to keep the interest high.

The Midas Conspiracy begs for a sequel.  It isn’t necessary for the story, but the reader will probably want to find out what happens to Cybil and Leara.  Even readers who don’t normally enjoy science fiction will probably find this book very enjoyable.  It’s worth giving a try.

Posted by Lynne Pierce at 10:20 PM No comments: 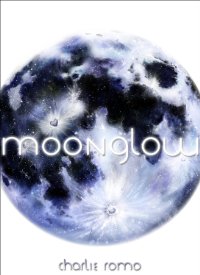 I just discovered this "lesbian" book was written by a man.  That probably explains a lot.

What can ruin the joy of reading a book?  How about if the plot seems to go nowhere?  Or if the characters are unappealing?  Worse, if the reader can’t tell the characters apart.  Maybe if the book is poorly produced.  The answer is a book that combines all of those problems and more.

Moonglow is supposed to be a story about fashion models and entertainers set in the future not too far away.  The major characters are Rena Hilst, a famous model who takes advantage of every chance to sleep with other women, and her supposed partner Shell Dawes, the head of Moonglow Model Management.  Shell is more than willing to overlook Rena’s infidelity because Rena doesn’t love the other women.  She just enjoys having sex with them.  Rena’s behavior doesn’t seem that far out of line when everyone around her is doing the same thing.  The book is one model or entertainer after another cheating on her girlfriend or partner, all in good fun, of course.  The crisis at the end is how long Shell is willing to put up with this behavior.

The blurb for this book says Rena never hunts for people to cheat with, but does this because she honestly cares for the people she’s with.  Apparently, she cares for them more than her long-suffering partner.  The first problem with this is that there is never anything shown about Rena that makes her appealing except her “great” beauty.  She’s spoiled, selfish and a drug addict.  Her partner is just as irritating for the way she puts up with the behavior and then provides excuses for it.  The reader might want to slap Shell and ask her what the devil is wrong with her self-esteem.  For someone who is supposed to be the head of the most powerful corporation around, Shell has an appalling lack of the decisiveness that good executives usually possess.  The next problem is that the characters are so one dimensional and identical in what they do that they’re difficult to tell apart or to like.  Basically, there is the cheating partner and the hapless, pathetic partner.  Even worse, the cheaters madly proclaim their love for their partners and then go right out and cheat again.  If it’s not cheating, it’s drugs or liquor.  The reader might ask why anyone would want to be around these women, but the answer is that they’re all behaving the same, so they hardly notice what they’re doing.  Besides, when they’re caught, the cheaters are forgiven.

The story is supposed to be a sort of science fiction, but the references are confusing.  They are basically limited to some unclear comments about transportation, communication and the materials that the models’ outfits are made of.  The scenes ramble from page to page without it being clear what point the author is making.  At the end Romo tries to reaffirm the power of love, but her characters are so unappealing, they don’t make very good examples of the idea.

A good editor might have saved this book.  There are fragments of a decent story, though they are difficult to find.  Moonglow’s greatest sin is that, by the end, the reader probably won’t care.  Save your money.  There are much better books to enjoy.

Posted by Lynne Pierce at 5:29 PM No comments: 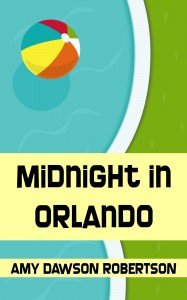 Readers want to enjoy good stories and they want to know that an author can be trusted to deliver on that point.  Amy Dawson Robertson is quickly joining the ranks of those who can be depended on to deliver the goods.  Though she is better known for her Rennie Vogel series of adventure/suspense novels, Robertson proves in Midnight in Orlando that she can perform just as well in other genre.  Officially this is a romance novella, approximately 100 pages long, but it reads with the depth and development of a full length book.

Anyone who has ever attended a lesbian literary conference will feel comfortable with the setting of this book immediately.  It takes place in Orlando, Florida, where lesbians are gathering to celebrate the books written for and by their community.  The story features two “Con virgins,” the term used for people who are attending the conference for the first time.  Susan Voight is a lawyer from Baltimore who faces the same problem many professional women encounter.  She works so many hours that there is no time to form a personal relationship.  She escapes the stress of her job by reading lesbian romance novels and that is what impels her to suddenly decide to attend the conference.  Nic Green believes she is neurotic and suffers from Obsessive Compulsive Disorder, although her therapist keeps telling her that neither is true.  She has been a successful author of lesbian romances for many years and is considered a mysterious icon because she has never appeared in public.  Nic decides to expand her horizons and try meeting some of her fans, which is what brings her to the conference.

What proceeds from this is a string of humorous situations bringing the women together.  Susan finds herself trying to duck a lawyer’s conference that happens to be in the same hotel, afraid that someone will discover her reading choices.  Nic goes to bizarre lengths to make herself “comfortable” in her hotel room and hide out, only to discover she is the keynote speaker for the conference.  For a while Susan believes that Nic might actually be mentally ill because of her behavior, but there is something compelling about each woman for the other.  Swirling around them are the events of the conference.  People who have attended one of these meetings will recognize the events and possibly some of the supporting characters that Robertson peppers throughout the story.

Midnight in Orlando is a gem.  It’s short enough to read quickly, but the characters are completely developed and enough is revealed about the events to make the story flow smoothly.  It’s a good example of how writing can be compact yet contain a great deal of information.  This is good reading, plain and simple.