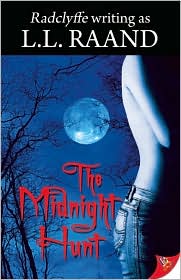 Radclyffe, writing as L.L. Raand, enters the arena of supernatural fiction with a book that is full of dangerous creatures and heavy on eroticism.

The Praetern species  - Weres, Vampires, Mages, Fae and Psi – have revealed themselves to the human world and are now fighting for full recognition as citizens with their rights protected.  The leader of the Praetern Coalition is Sylvan Mir, the Alpha of one of the largest packs in North America.  Sylvan is beautiful, charismatic and dangerous.  She will go to any extent to defend members of her pack, which is how she meets Dr. Drake McKennan.  One of the younger pack members is attacked by renegade Weres and Drake tries to treat her in the hospital.  Sylvan warns Drake to stay away from Were patients for her own safety, but inevitably Drake is bitten by one that she tries to help.  As Drake is initiated into the pack, she presents a distraction for Sylvan and a threat.  Sylvan has never mated because she has to focus all of her attention on protecting the pack and pushing through the laws that would protect the Praeterns.  A mate would not only distract Sylvan from doing any of her jobs, but would also be a vulnerable point of attack.  Drake wants Sylvan, but a relationship could cost them their lives.

The Midnight Hunt deals with more than one subplot.  Supernatural creatures are cast as another group that is fighting for civil rights and the reader can't help but draw analogies with the fight other groups have gone through.  There is also the conflict within the Praetern community between those who want to fit into general society and those who don't see a need for that, also reminiscent of real groups.  The focus of the book however is the interaction among the pack members, their hierarchy and casual attitudes about sex.  This book may be presented as speculative fiction, but it's also a work of erotica, to the point of almost overdoing that aspect.  Sometimes the characters are so focused on releasing sexual desires that the reader might wonder how they find the time to do other things.

There is a good story at the center of this book and fans of supernatural fiction will probably find it particularly appealing.  The explanation of Were society is interesting and the book works well as a set up for the later books in the series that the author promises.  She may be writing under a different name, but it shows the solid writing for which Radclyffe is known.
Posted by Lynne Pierce at 10:21 PM