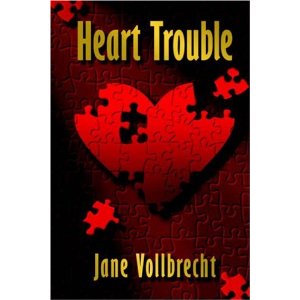 Heart Trouble presents a reader with an interesting dilemma.  The story is well told and follows the usual formula for romances, but the personalities and behaviors of both of the lead characters make them unappealing.  The two women are unlikable for different reasons, but at times it makes it difficult to focus on the story.

Jackie Frackman is a management consultant who travels the country giving seminars and training sessions to employees of other companies.  Her company pays her to fly in, present workshops for most of a week and then she moves on to the next town.  That suits her fine since both her family and her love life don’t give her much reason to stay at home.  At one of the seminars Jackie meets Beth Novotny. Jackie’s attraction to Beth is overpowering, but she finds Beth confusing.  Beth seems to welcome her attention, but is obviously hiding something from Jackie.  Undaunted however, Jackie arranges to meet Beth when she is in her area for another seminar.  Jackie plans a week of romantic encounters only to discover why Beth is being mysterious.  Beth is living with a woman she has been in a relationship with for a few years and the woman is abusive.  Beth assures Jackie that, once she’s found a way out of the relationship, they can be together forever, but Beth is closeted, secretive and doesn’t mind telling lies to everyone, including Jackie.  Beth keeps insisting that, though she is trying, it will take time to end this relationship and Jackie just has to keep hanging on and putting her life on hold until Beth can do that.  And Jackie has to make sure that she doesn’t become a victim of the jealous girlfriend who is hot on her trail.

In trying to decide how to describe these characters a scene from “Moonstruck” came to mind.  It’s the one where Cher, after hearing Nicholas Cage profess his love for her, slaps him across the face and yells, “Snap out of it!”  That’s exactly what Jackie and Beth needed in this book.  They see each other across a crowded room and are immediately, passionately in love, though they barely exchange words.  Jackie is constantly realizing that she’s being made a fool of and in the next breath can’t wait to get her hands on Beth.  For a character that can make so much sense one minute, it’s frustrating that she then turns around and acts like such a goof.  The really unappealing character is Beth.  The way she meets her partner is creepy, then she cheats on the partner, has all kinds of hang ups and isn’t honorable in the way she treats Jackie, though that’s hardly surprising based on her other behavior.  It makes it almost impossible to enjoy the story when the questions that keep coming up are, “What in the world is wrong with these two?” and “When is Jackie finally going to get some sense about this woman?”  Let’s repeat that, technically, the book is well written and the story does eventually resolve itself.  And there are other characters in the book that come off better.
Perhaps it’s a true measure of the author’s ability that the story does keep the reader reading even if the main characters aren’t very sympathetic.  What exactly it is that keeps a person reading is perplexing however.  Hopefully, it isn’t because the reader sees any of herself in either Jackie or Beth.
Posted by Lynne Pierce at 4:23 PM