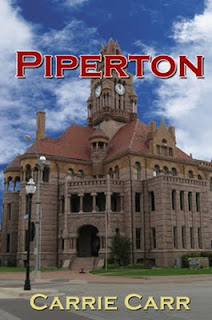 Piperton, Texas is a hard scrabble town that is slowly dying.  It’s ironic that the most impressive building in the deserted downtown is the old courthouse because there is little justice in this town if you’re different.  Sam Hendrickson didn’t plan on stopping there, but her old car finally dies and Sam finds herself trapped in the town until she can raise some money.  Unfortunately, with her short haircut and androgynous dress, she sticks out like a sore thumb and she has to deal with bigoted attitudes from the first moment.  As she picks up a string of odd jobs, all she wants to do is get enough money to leave this place behind.  Then she meets Janie Clark.
Janie has lived in Piperton all her life and all she knows is the culture there.  Her job in a doctor’s office really isn’t fulfilling, but the biggest problem is that her father is trying to force her to marry a man she doesn’t love.  That seems to be what women in Piperton do.  Meeting Sam causes her to reassess her life, appearance and attitudes.  As they grow closer there is also a growing sense of danger, especially after Sam endures a vicious beating.  Staying in Piperton could cost them their lives, but Sam won’t leave without Janie and Janie would have to reject everything and everyone she has always lived with.  That’s a lot to ask of someone who has never taken a risk before.

Piperton reminds readers that not everyone lives in the same society, not even within the same country.  People sometimes forget that, hidden within tiny enclaves, there are values and attitudes surviving quite well as the rest of time passes them by.  The cover art on this book is especially evocative of that reality.  The atmosphere in this town is more reminiscent of the 1950s than the 21st century except that these ideas can still be found existing.  The characters are quite real though and the story drives the reader on as you want to find out how Sam and Janie cope with the situation.  Their relationship develops a little too fast and Janie’s transformation seems too easily accomplished, but Carr tells a story that is on the whole convincing.  One of the best characters is an older woman named Betsy who not only provides Sam with shelter and support, but injects the humor into the story that keeps it from becoming totally depressing.

Piperton is easy to read and has an absorbing story, but it also emphasizes for the reader an important truth.  In a time when people are loudly proclaiming that all gay people should be out and proud, sometimes the smartest move on a battlefield is a strategic retreat….or at least a change of location.
Posted by Lynne Pierce at 7:01 PM