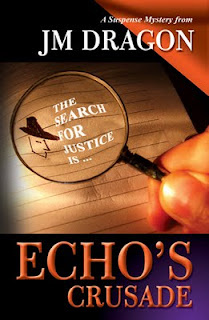 Echo Radar and her best friend Karen Thompson comprise a winning team at their advertising company and have begun to develop feelings for each other that could lead to more.  Echo invites Karen to spend the Thanksgiving holiday with her family, but Karen has already made plans.  She volunteers at the Greystoke Project, a prominent shelter program for the destitute and street people, and plans on spending her holiday with one of the women she is trying to help.  She promises Echo that they will explore their relationship after the holiday.
Unfortunately, when Echo returns to work she discovers that Karen is dead and the police have declared it a suicide.  Even worse they are claiming that Karen brutally murdered the other woman before she killed herself.  Echo refuses to believe that Karen was capable of either act and insists that the police reopen the case.  Detective Roan Keating ignores Echo at first, or tries to, but she can be very persistent and eventually Roan has to admit that the evidence doesn’t add up.  As Roan begins to investigate the case it becomes clear that there has been a cover up that involves the police department that is not just a job for Roan, but her family business.  She would like to drop the case, but Echo is on a crusade to clear her friend’s name and Roan is very interested in helping Echo.  The facts they uncover could end up costing both of their lives.

JM Dragon has written an engaging mystery.  It’s not long and complicated, but it does hold the reader’s attention.  Echo is an appealing character in her devotion to her friend and her personality, which is a little bit spacey.  Roan’s battle between doing what is right and protecting the police department is a reflection of her own complex character.  The two pull the reader through the book in what is a fairly quick, but enjoyable story.
Perhaps the most important aspect though is the sense that Karen should get justice.  She was a person trying to do something good for another individual and was not only brutally murdered, but had her reputation smeared.  The reader will root for Echo to be successful in achieving this one last gift for her friend, to prove who she really was.  The romance that develops between Echo and Roan is a bonus.