Love is Love by Donna Barnes 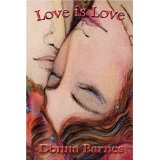 
This book is so poorly written that there is no point in wasting time summarizing it.  The story itself isn't bad, although it's been told many times before in lesbian literature. A writer falls in love with a movie star she has a crush on and the movie star is afraid to admit her feelings because it might ruin her career.
The problem is that the reader can't get through a page without finding a mistake - words left out, words spelled incorrectly, wrong verb forms, wrong forms of words like they're/their, your/you're, double words like "She they decided...." It's not a matter of three or four errors in a whole book, which can be excused, but every page. And the dialogue is terrible. If the reader had to listen to two people actually talk this way, the reaction might be to either wonder what planet they dropped from or to want to get away from them. When the couple finally makes love they refer to body parts by their scientific names.  It was like listening to a lecture on the female anatomy.
This is one of those books that it's just painful to read because of the mistakes. Save your money and invest in some of the other, much better written, books out there that tell the same story.  Read this at your own peril.