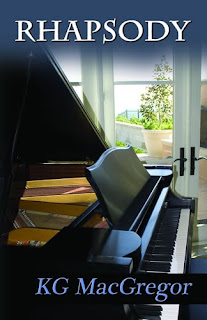 If you read a lot of books by the same author, one thing that develops is a feeling for the style she uses. What always interests me is a writer who grows her style, finds ways to improve and doesn't write the same story or characters time after time. There is a challenge to that and to be able to do it indicates creativity. KG MacGregor has written romances for a while, but her plots have become more intricate and her characters more developed, which makes her stories more interesting to read.

Rhapsody is about Ashley Giraud and Julia Whitethorn. Ashley is a popular news anchor in Tampa Bay, naturally concerned that her public image and private life not spill into each other. It's already known that she's a lesbian because of a very public failed relationship, but she wants to keep that out of the viewers' minds as much as possible. Ashley prefers to retreat into her home and shut out the world when she's on her own time. When she needs a new hairstylist, she's directed towards Rhapsody, the shop owned by Julia. Rhapsody is a gathering place for a diverse group of lesbian friends and Ashley finds herself drawn into their world. Roller skating, dancing, charities and the events of her new friends' lives begin to draw her out, but there are things about her past that she's not sure she wants to share with these people yet. Julia is attracted to Ashley and realizes that she's dealing with some inner demons, so she tries to be patient, but how long do you wait for the butterfly to come out of its cocoon?

The word "rhapsody" has more than one meaning. An archaic one is that it's a portion of an epic poem that is recited. The more common one is that it's an irregular musical composition with a lot of improvisation. Rhapsody in many ways combines those definitions. There is the classic story of two women coming together to try and establish a relationship. At the same time there are twists and turns in the story involving unusual friendships and events that the characters have to relate to spontaneously and sometimes atypically. There is almost a dance that goes on between Ashley and Julia as Ashley tries to find new ways to respond to these women and Julia struggles to give her the space she needs while staying close enough to help.

To perform that dance requires characters with experience in life. They've practiced the dance before and failed. This tells them how intricate and difficult the situations are and what the possible pitfalls can be. This requires characters who are more mature and seasoned. So many books feature bright perky twenty-somethings who can offer beauty and energy, but no real talent at dealing with life or the maturity to see the consequences of their actions. MacGregor's characters are older. They have experiences they can call on to navigate the dance, yet they still make mistakes because they are so human. It gives the characters a richness and depth that is often missing in other books.

Rhapsody is a very satisfying romance for those who love the genre, but it offers a lot more for the person who is looking for something extra in her reading. MacGregor might not have been able to write this story ten years ago, but she has grown her style to where she masters the technique now. It showcases her ability and makes this an interesting story to read.
Posted by Lynne Pierce at 1:06 AM No comments: 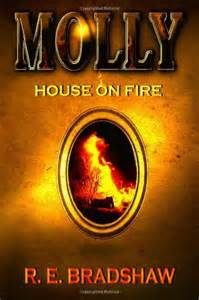 Molly: House on Fire is the story of Molly Kincaid.  Years before she left a town that never treated her or her mother very well and now she’s come home, reluctantly.  Molly has a new name and is a successful lawyer, but she can’t overcome the hurt of the past.  When her mother was murdered, only one police officer cared enough to pay any attention and now he has died. Molly has returned to repay a debt by defending his grandson against a charge of murdering his own mother and walks into a mystery that ties the two events together.  Molly also meets her match in Leslie Walker, the specialist who works with her client.  Together they discover that the town has changed in many ways, but not some of the most important ones.

This was an enjoyable story, slightly predictable, but with characters that hold the reader’s attention.  It will keep you reading; however, there are some problems.  There are a lot of mistakes in the beginning of the book.  That includes misspellings, words missing and words used incorrectly.  For example, at one point a character walks down the “isle” of a store.  Silly errors like that should have been picked up by the editor.  In fact, an editor should have done a lot of work on this book.  There were many extraneous scenes that drag the story out and do nothing to move the plot forward.  They could have been easily eliminated.  The paperback copy was sloppily produced with uneven margins and too much white space.  All they do is make the book longer.

If the reader ignores the physical problems with the book, there is an enjoyable story there.  With a little more care to its production, it could have been outstanding.

The Storm by Shelley Thrasher 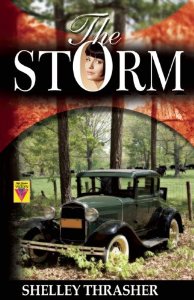 The problem with a novel based on history is that the reader probably already knows what is going to unfold in the events.  The author however should not telegraph her moves ahead of time.  One of the tricks of a historic novel is keeping the reader believing that something different is going to occur from what she expects even though she knows it can’t.  Shelley Thrasher tells a typical romance, but she couldn’t disguise the history and that makes the story predictable.

Jacqueline “Jaq” Bergeron is one of those Americans who volunteered to help in World War I before the US actually entered the war.  It was an exciting time for women as they entered a period of greater personal freedom and hovered on the rim of gaining full political rights in the US, so Jaq seeks adventure by leaving her home in New Orleans to serve as an ambulance driver in France.  After seeing more than she needs to and a disappointing love affair, she returns home as the wife of a war hero she doesn’t love.  He agrees to give her a divorce if she will go to his home in East Texas and help with his family.  While there Jaq meets Molly, who is trapped in a friendly but passionless marriage.  Molly escapes from her overbearing mother-in-law and drab surroundings by caring for her son and immersing herself in music.  Jaq opens a window to a world that Molly never imagined could.  A killer brought home from the war has the power to reorient everyone’s reality.

The Storm is a routine romance.  Women meet, encounter an obstacle and have to decide a way around it.  What could have made it different is the time period in which it is set.  The book doesn’t have any energy though.  The story drags from one scene to another, following the formula and practically ignoring the energy of the time.  Women are on the move.  They are claiming a new existence for themselves.  Little of that is in here.  There is one episode where Molly decides to register to vote, but that interest level isn’t sustained through the book.  The rest of the book is uneven.  The characters don’t shine or stand out.

The situations don’t ring true either.  Molly fears the disapproval of her mother-in-law, but thinks nothing of sneaking off for hours with Jaq to do something else.  They don’t want anyone to know what is going on between them, but their behavior indicates that something is very much out of the ordinary.  Because Thrasher switches from the mind of one character to another, including Molly’s mother-in-law, it’s sometimes easy to lose track of who is “thinking.”  That means the reader has to backtrack and pick up the threads again.

The most disappointing part of the book is the way it handles the Spanish influenza epidemic that hit the US during World War I.  That was one of the most dramatic episode in recent US history and a societal change agent.  This could have been used to give the book a real punch, but it wasn’t.  Instead, the flu becomes a simple means to an end.

Those looking for a book to entertain them will find The Storm meets that requirement.  If you like to learn something about a period when you read, you’ll find this book falls far short of what it could have been.

Posted by Lynne Pierce at 2:27 PM No comments:

For anyone who doesn't know, but I'm sure many of you do, the Golden Crown Literary Society will be having its annual conference in Dallas this year at the end of June.  If you're not familiar with it, you can check at the web site.

One of the offerings will be about reviewing and is titled "To Critique or Not To Critique: How and Why Reviewers Review."  It will take place on June 28 at 2:15 PM and will be moderated by Carleen Spry.  The folks on the firing line will be Elaine Mulligan, Salem West (The Rainbow Reader blog) and me.  Yes, all rotten fruit will be confiscated at the door.

We've come up with a list of topics to be discussed and, according to Salem, For authors and publishers seeking or fearing reviews, this will be a "must attend" session.

So, if you're in the Dallas area or planning on attending the conference, come on by and see us.  At least you'll know from now on who you want to slap.