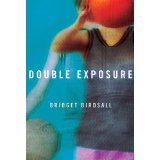 Double Exposure addresses an issue that is not often seen in novels, people who are intersex. Intersex people are those who are born with the gender characteristics of both male and female. This occurs more often than most people are aware because doctors and parents usually prefer to alter a baby to one sex soon after birth and then keep the situation secret. Bridget Birdsall has chosen as her character Alyx Atlas, a fifteen year old whose parents decided to wait for the procedure until their child was older.

Alyx spends the first fourteen years of his life defined as a boy, but life is not easy. He has just enough questionable characteristics to make other boys wonder about him and he is coming to identify himself as a female. After a vicious beating, Alyx’s mother moves him across country to be with her family and to start Alyx’s life over as a girl. Being a teenager is difficult enough, but Alyx’s life is almost unbearable. Her refuge from everything is basketball. She’s very good at that and uses it as the way to make a life for herself in a new high school and community. As the team moves higher in the standings and seems headed for a state title, Alyx begins to feel good about herself for the first time. Nothing stays secret forever though, especially when a jealous teammate begins digging into Alyx’s past. Learning to cope has a whole different meaning when it’s applied to her situation.

Birdsall’s book is an interesting look into what it feels like to be “different” in society. Unfortunately, it doesn’t have much depth. According to the author and the way the book is listed, it’s meant to be for young adults, but there isn’t anything here to help them if they happen to be intersex or to make a person more emphathetic towards people who are different. The book is a good look into girls’ basketball and how a team works. It also gives a view of what it is to be a child living in a family where everyone is just a little “different.” Alyx could be any teenager though. What she deals with at school and on the basketball team could apply to any teenager. The fact that she feels alienated from her family is certainly not unique. The problem with the book is, if you take away the fact that Alyx is intersex, then this is nothing more than a story about a teenager trying to come into her own sense of identity. Then Alyx spends too much time whining about her family and how everyone is unfair to her to be really sympathetic.

Perhaps Birdsall meant to show that intersex youth are no different than other people. In that case, the book is successful. If you are searching for a book that will help you or someone you know learn how to deal with being intersex, this one won’t help much.