All the Bold Days of My Restless Life by Sharon Stone 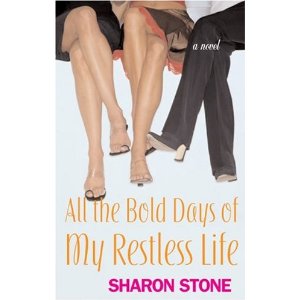 Zany was a term that was sometimes applied to the screwball comedies made for television and the movies in the 1950s and 1960s.  It meant something that had little redeeming quality except that it was hilariously funny.  If there was ever a book that fit the definition of zany, this one is it.  Very few things make me laugh out loud, but I found myself roaring at many of the incidents described and the closing scenes had me literally howling.

Bailey Conners is the head writer for a soap opera called All the Bold Days of My Restless Life.  She presides over a writing staff made up of people who are only slightly less nutty than the actors she has to deal with.  There is Peter, her assistant, who is determined to help Bailey meet Ms Right after her girlfriend dumps her.  He manages to arrange three blind dates from hell.  The first is with a woman who has a midnight online sex show and likes to use her dates as her "special guests." The second regales Bailey with intimate details about why she has six children and how that has convinced her to start dating women. Then the last is a cop who gets drunk and starts shooting rats as they walk down the street, causing an encounter with some of New York City's finest.  Encouraging Peter is his partner Alec who absolutely refuses to wear his glasses so he is constantly mangling everything he reads.  For example, he berates Bailey and Peter for the poor offerings on TV, until Peter points out that what he has read in the TV Guide as "Ten With Macaroni" should have been "Tea With Mussolini."  When Bailey isn't trying to avoid more of Peter's dates, she's dealing with a goofy bunch of writers, the idiot daughter of the boss who has been added to her staff, and a truly weird assortment of network executives and directors.

Then there is the show itself.  Every horrible cliché that can be written about a soap opera applies to this one.  What can you say about a show that has a main character named Aruba, her mother is Myrtle Beach and her stepsister is Bermuda Schwartz?  And then there is the fact that the two major stars of the show spend all of their time trying to do each other in professionally.  Derek Young is the vain aging leading man who has built his entire career around this show and he is determined to have the female star fired.  Morgan Gable, who plays Binaca, is a hold over from the glory days of Hollywood.  She's not only smarter than Derek, but more attractive to both sexes.  These two haven't had a line written for them that they can't twist while on air, giving their ad libs wholly different meanings than what Bailey's writers intended and driving the censors crazy.  The final scenes of the book deal with a special "live" performance that will leave you weeping with laughter.

This is a tremendous spoof of soap operas, much like the movie Soap Dish, but better.  If you have read Sharon Stone's other book, Love Letters in the Sand, you will not be prepared for this book.  They are so different it's difficult to believe that the same person wrote them.  If you don't  like satire and take your soaps seriously, this is not the book for you.  However, if you enjoy a book that reads quickly and makes you giggle, check this one out.