The Skin Beneath by Nairne Holtz 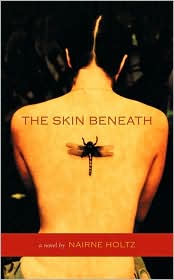 Sam O'Connor's sister Chloe is dead.  That much is certain.  She died in a hotel in New York City five years before the book opens.  That much is certain.  Everything after that becomes murky.  Sam was allowed to believe that the older sister she idolized killed herself with an overdose of drugs, but she receives a postcard telling her Chloe died of a gunshot wound and that it might not have been self-inflicted.  This sets Sam on a quest to learn what exactly happened to her sister and why her father hid the truth.  Her search takes her to Montreal, Toronto, Detroit and New York, following every twisting thread of Chloe's life, trying to find out who her sister really was.  She encounters paranoid conspiracy fanatics, possible Middle Eastern intrigue, supporters of paramilitary organizations, prostitutes and a possible love interest in Chloe's old roommate Romey, an exotic dancer.  Each bit of information Sam discovers leads her to a new mystery and a new city.  In the process she tries to free herself of the domination that Chloe's personality always had over her.  At the end, that might be more important than finding out the truth about how Chloe died.

This book has been nominated for the McAuslan First Book Prize in Canada where it was published and has received good reviews from publications there, which is perplexing.  Perhaps this is one of those books that appeals to certain cultures though it's hard to believe that Canadian and American tastes are that different.  This reviewer found the plot confusing in that it doesn't resolve anything.  First, it appears to be a murder mystery; then it seems to be about political intrigue and conspiracies.  In the end, it's not clear what it is about.  The story moves from scene to scene with bizarre characters who take the score for paranoia right off of the scale.  None of the pieces seem to fit together except that Chloe walked through them and there is no resolution at the end.  Parts of the story seem to contradict each other.  Ultimately the inclusion of all of the side stories about conspiracies and having Sam run all over the place don't make sense if the ending doesn't make them significant.  And, if these people were as paranoid as they are described, why would they so willingly share things with Sam?  If Chloe killed herself, then what was the point in anyone sending Sam the postcard?  The failure to tie up loose ends leaves a very unsatisfying feeling.

It might be easier to ignore the confusion in the plot if the characters were more appealing.  Sam never reaches out and touches the reader so that you care about what she is trying to do.  It's not until page 208 that an insight is given into the fact that Sam is trying to escape her sister's influence and from where the book gets its title, but the rest of the story that follows muddies everything up again.  Sam's relationship with Romey has no depth and, though Sam claims to madly love her, it's apparently not enough to keep her away from other women.  The one really interesting character, named Amanda, is the one that is most incomplete.  She's intriguing because of her behavior and all of the suggestions made about what she "might" be, but it would have been nice to have one of them resolved.

The Skin Beneath is a perplexing book.  Some people will probably find it enjoyable.  This reviewer didn't.
Posted by Lynne Pierce at 6:27 PM