A Matter of Degrees by Alex Marcoux 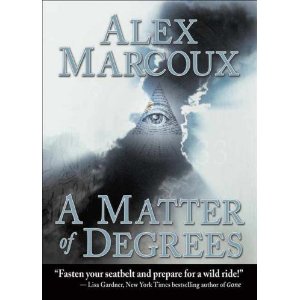 How many conspiracy theories can one story accommodate?  After reading Alex Marcoux's work, A Matter of Degrees, it would seem that answering that question was one of her major objectives in writing the book.

A Matter of Degrees brings back Marcoux's heroine Jessie Mercer, a novelist who has the gift of precognition.  Jessie often finds that she writes a story and then it comes true, with her in a starring role.  This time, Jessie's brother Steve, a news reporter, is working with a colleague on a story about the Freemasons and their connections to other secret societies supposedly cooperating for world domination when he suddenly dies.  The police believe it is suicide, but Jessie isn't sure about that, especially when incidents from her brother's life begin to mimic what is in her most recent story.  She decides to assume a disguise as a man and find out what happened to her brother by becoming a Thirty-third Degree Mason.  Television newswoman Rachel Addison, one of Steve's friends, assists Jessie in her quest.  As the story unfolds, Jessie finds herself dealing with the Freemasons, the Council on Foreign Relations, the Trilateral Commission, the Bilderbergers, the Roman Catholic Church, a story similar to the premise of The DaVinci Code, and flashbacks to a previous life in ancient Egypt.   Even the Secret Service is portrayed as a surreptitious hit squad used to enforce the leader's wishes.  She has to contend with all of this while she disappears from her own life for almost a year and keeps her lover songstress Taylor Andrews, who is on a world tour, from finding out what she is doing.  The ending of the story culminates with a totally different conspiracy and puts Jessie in danger of losing her life.

Marcoux's first two books, Facades and Back to Salem, were extremely enjoyable and dabbled in the supernatural in a believable manner.  A Matter of Degrees however stretches creditability well beyond the breaking point.  The book has a slow start, perhaps because Marcoux lays a foundation based on the idea that all of the conspiracy theories in world history, including various assassinations, are not only true, but connected in a confusing pattern created by the people who really control the world.  One conspiracy might seem logical; maybe two if the reader chooses to believe the current theory that says secret societies are linked in the New World Order.  After a while though there are so many theories and suspicious circumstances that occur with no one being the wiser that it becomes impossible to accept the premise of the book.  The end of the book is somewhat flat and predictable.  A character that has been omniscient for thousands of years doesn't have the ability to see what is going to happen next.
Marcoux says on her web page, "As you will soon see, my stories are a bit more complex than my earlier work".   A Matter of Degrees is proof that more complex does not mean the story is better.