The Middle of Somewhere by Clifford Henderson 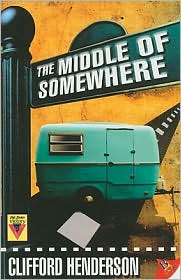 Eadie Pratt is running from a broken relationship in San Francisco and is headed for the Womyn's Music Festival in Michigan to forget her problems.  Unfortunately, she's driving a junk car that is hauling a junk trailer and she breaks down in Rauston, Texas.  Rauston is one of those small towns that the major highways have bypassed, peopled mostly by folks who know everything about each other and are willing to forgive most of their eccentricities.  While she tries to work off the money to pay for her car repairs, Eadie is taken in by two sisters, nicknamed Piggin and Heifer, who treat her like a member of the family.  She befriends an odd assortment of friends, including a mentally deficient boy, a teenage boy with an abusive father, and Cadence, a computer whiz who is in town searching for her birth mother.  As Eadie and Cadence become more involved with each other, they also uncover a scandal that could rock the whole town.  Eadie never planned to become attached to these people and their lives, but she feels an obligation to try and save them.

Clifford Henderson has created a story full of quirky, interesting characters from the sisters to the Baptist minister to darker characters in the book.  She captures the atmosphere of a small Southern town and the life that tends to occur in one extremely well.  They make the book fun to read and the different plot points blend together to create a believable story.  The major flaw unfortunately is Eadie.  Her negative attitude when she first encounters the town is understandable based on what has just happened in her life.  The fact that she starts off making snide, dismissive comments about the town and its people leads the reader to the impression that her behavior will change as she comes to understand what they are truly like.  That isn't what happens however.  Perhaps Henderson intended to create a character that didn't grow.  The people, especially the sisters, go to tremendous effort to help Eadie any way that they can, but no matter how nice they are to her she continues to denigrate them all.  Though she eventually comes to think better of the sisters, she maintains her immature attitude and her behavior is so irritating that it distracts from the story.

This book is available in audio format and that actually enhanced the story for this reader.  After reading the book it left a rather negative impression of the entire work.  Listening to the author reading her own words gave an emphasis to characters and story points that didn't come off of the printed page.  This improved the reviewer's opinion of the book if not the reaction to Eadie.

The Middle of Somewhere is actually a fairly strong story.  If the reader isn't bothered by Eadie's behavior, then the book should provide several hours of entertaining reading.
Posted by Lynne Pierce at 10:14 PM