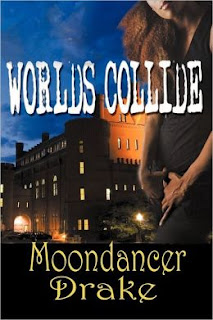 
Moondancer Drake continues her story about the extended family of shape shifters from her first book Natural Order.  In this book, Rune Nqumayo is a veterinary student in Madison, Wisconsin, and the leader of her local pack.  Rune runs her life by a strict code of honor and duty, but she’s facing a number of challenges.  A rogue group of vampires is threatening the lives of humans and shape shifters in the area, then, after a serious attack, she finds herself depending on the help of vampires.  Everything she has been taught tells her that Nara is a disgusting creature, but neither she nor her people match the stereotypes by which Rune has been taught to live.  If she is going to bring peace and safety to her people and the humans, Rune may have to risk being ostracized by her own clan.

Worlds Collide is another of those books that takes an alternative view of vampires (some of them), werewolves and other supernatural creatures.  This is becoming a common theme in literature, probably due partially to the success of the Twilight series, but it doesn’t make the story any less enjoyable.  The book is short and could have contained more detail, but it basically contains a good story.  There is a classic battle between good and evil and a hero who stands out by her strength.  The book has entertainment appeal.

For those who like a book that is quick to read and features paranormal creatures, Worlds Collide fits the bill.  It’s fine for a little escapism.

Posted by Lynne Pierce at 12:09 AM No comments: