Neither Present Time by Caren Werlinger 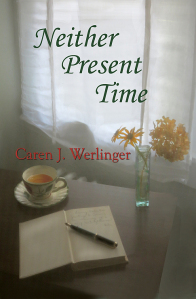 It gets to be boring to review Caren Werlinger’s books after a while. After it’s been said a few times that her writing is magnificent, engrossing, sophisticated and thought provoking, to say it again seems redundant. There is a danger that people might not believe the reviews anymore. So, here is a new word – consistently. Caren Werlinger’s books are consistently magnificent, engrossing, sophisticated and thought provoking.

Neither Present Time is the story of two women who are brought together by a book. Beryl Gray is a university librarian who finds a book with a personal inscription in it and is driven to find out more about the people involved. This leads her to Aggie Bishop and her great-aunt Cory. Beryl and Aggie share the characteristic of being caregivers. Beryl cares for practically everyone she knows and Aggie is trying to care for Aunt Cory. Since Aunt Cory doesn’t think she needs any help, even though her family is trying to institutionalize her and sell away the family home, Aggie’s one case practically equals all of Beryl’s. Neither Beryl nor Aggie has been able to sustain healthy relationships, but in learning Aunt Cory’s story, both women will learn a great deal about themselves. Looking into the past will cause them to examine the present with different eyes and will alter the lives of all three women.

Werlinger tells a good story, but what makes her book more appealing is the complexity of what she presents. There is romance in the book, but romance is in the story not THE story. There are messages and lessons to be learned while her characters do a complex dance weaving together the themes, including moving between different time periods. Werlenger’s talent is shown by the story being real, but not preachy; complex, but easily understood; and peopled by characters the reader probably knows.

Neither Present Time is like all of Werlinger’s books, a good read.

Posted by Lynne Pierce at 11:56 PM No comments: