Under the Big Montana Sky by Jillian Carole 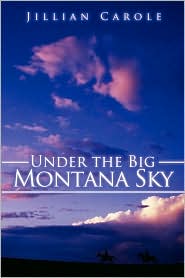 Sometimes self-published books come out OK and then there are books that needed help before they were published.  Under The Big Montana Sky is one of those.

Sarah Erickson and Alice Thompson have been email friends for over five years.  Despite their difference in age, they have bonded and Sarah travels to Montana to finally meet Alice.  She doesn't know that Alice is a very wealthy woman who lives on a large sprawling ranch or that she has a daughter Jo who thinks Sarah is a gold digger.  Jo is furious when she discovers that her mother has created a trust fund for Sarah to be able to pursue her art career and, despite the fact that Sarah doesn't know about the fund, Jo is determined to prove to her mother that Sarah is no good.  What Jo doesn't anticipate is that Sarah will win her over with her naïve personality and Sarah is about to discover things about herself that explain some unanswered questions in her life.  The two women are drawn together until a tragedy forces them apart.  Sarah returns to her home in Houston unsure of how Jo feels about her, while Jo's life spins out of control.  The question is whether anything can get Sarah to return to the Big Sky Country of Montana to give them a second chance at happiness.

The story itself is fairly standard lesbian fare and flows at an even pace.  The problems with the book could have been solved if the company had provided a decent editor to work on it.  There are too many grammatical errors, incorrectly used words, and poorly written dialogue.  Often it's difficult to determine if a character is talking to another character or thinking inside her head.  Then there are mistakes in details.  An example is when the receptionist in the law office tells Sarah everything about her trust fund over the phone, which anyone should know would be a breach of confidentiality.  The relationship is dealt with in a somewhat superficial manner because of a lack of development and the ending seems abrupt.  None of these are flaws that couldn't have been corrected or improved by a skilled person going over the story and making suggestions.  Unfortunately, that wasn't done.  Still, if you can ignore the mistakes, the story isn't bad.