As Far As Far Enough by Claire Rooney 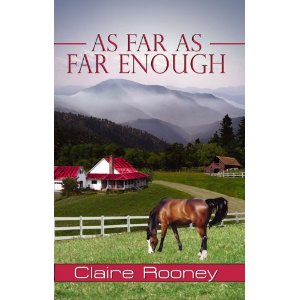 Collier Ann Torrington is a fugitive from her own family.  She ran away on her wedding day when her father, a powerful US senator, tried to force her to marry a man who would further her father's career.  She doesn't have a plan except to keep running so that Senator Torrington can't use his extensive resources to find her.  An accident that damages her motorcycle strands her in the Blue Ridge Mountains however and she finds herself hiding on a farm owned by Meri Margaret Donovan.  Meri has suffered her own trauma and prefers the life of a semi-recluse, shying away from interacting with the world.  These two would seem made for each other, but there's still the problem of Collier's father and the ruthless way he may deal with both of them.  With the help of Meri's old boyfriend, they come up with a unique plan that leads to a confrontation with Collier's parents, the shattering of her family and a dramatic change in the senator's fortunes.  Maybe a quiet life on the farm will be possible after all.

As Far As Far Enough is pedantic reading that can provide a couple of hours of diversion.  The basis of a good story is there, but the characters are sometimes superficial and underdeveloped.  At times the reader doesn't care what happens to them because there is little to no engagement.  The solution the women come up with to free them from the senator's control is ridiculous at best and disturbing for its callousness.  Without giving away a plot point, suffice it to say that what they do is done for all of the wrong reasons.  The different elements of the story don't blend, but come in fits and starts and sometimes don't ring true.  When Senator Torrington finally makes his appearance, he comes off more as a Mafia don than a skilled politician.  The collapse of the Torrington family is awkward and Meri's behavior often borders on neurotic.
The story does have redeeming points however.  The plot line, though not fully developed, has some directions that aren't predictable and therefore keep it interesting.  The supporting characters are indeed "characters."  Aunt Beatrice strikes a nice balance between being shocked and then supportive when she discovers the women's relationship and there is a horse that provides some humorous incidents.  The people in the town are perhaps a little too "rustic," but that doesn't mean they aren't accurate to some places.

As Far As Far Enough shows that Claire Rooney has the basics of storytelling and it will be interesting to see how she develops her skill in later books.  The book is a short, quick read and fine for a few hours of entertainment.  That's probably what most readers are looking for in the first place.