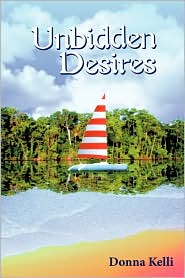 
Unbidden Desires is Donna Kelli's second novel and a continuation of the story begun in her first book Hidden Feelings. It is the story of two teenagers who are trying to understand their feelings for each other and decide what they want their roles in each other's lives to be. As the two girls struggle with their feelings and how to deal with the perceptions of society, it will remind many women of the struggles they experienced—both bitter and sweet.

Hidden Feelings is about Lori Hunter and Julie Conners, who have known of each other much of their lives and attend the same high school, but they don't travel in the same circles, so their contact has been limited. Lori is the star athlete, excelling at every sport she plays, and admired by students and teachers for her humility as well as her skill. Julie is a cheerleader and one of the "in crowd," beautiful beyond belief and chased by every jock in the school. It isn't until the girls end up as counselors at the same summer camp that they come to know each other, first as friends and then, startling them both, as lovers. As the girls try to understand what is happening between them, Lori saves Julie from a male counselor and a near-rape; then the camp closes and the girls return home with nothing settled between them.

As the second book, Unbidden Desires, opens, Julie and Lori are preparing to begin their senior year in high school and their confusion is evident. Neither girl is comfortable with the idea of declaring herself a lesbian and they are terrified that their families and friends will realize that they have more than a friendship. The reader will travel with them as they try to understand what this situation means, their attempts to transfer their emotions to boys, their concerns about what the future can hold for them and the undeniable attraction that keeps pulling them together even when they try to resist it. Meanwhile, the man who tried to rape Julie is stalking the young women and is threatening them with harm physical harm if Julie's family doesn't drop the charges against him. Lori's instinct is to confront the problem head on and Julie wants everyone to forget it and just let it go away, adding another complicating factor to their relationship. By the end of the book some issues are resolved, some aren't, but you will feel that you've taken a trip with which you can very often identify.

One minor problem with this book is that it's a product of self-publishing. Some of the dialogue needs refining and there are grammatical errors that a good editor would catch. The ending of Unbidden Desires indicates that there may be a third in the series. If that is true, Kelli needs to attach herself to a publisher who will give a book the polish it deserves. A hint to publishers: this is one you want to take a look at.
Posted by Lynne Pierce at 5:06 PM