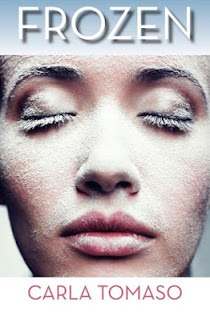 What is your worst nightmare?  Carla Tomaso has come up with a worse, but funnier one.

Elizabeth always had a difficult relationship with her self-centered domineering mother Helen.  Now she’s in her forties, alone, suffering from low self-esteem and, frankly, looking forward a little bit to when the old woman finally dies.  Helen is sick, crippled and possesses a sizeable fortune.  In Elizabeth’s mind, death would be a kindness to both women.  When Helen dies, Elizabeth discovers that her mother has concocted the ultimate “gotcha.”  Helen has found an experimental process that not only freezes a person to bring her back, but regresses her age to an earlier point.  If Elizabeth wants to inherit her mother’s estate, she has to agree to adopt Helen as a child and raise her.

Elizabeth believes she’s been given a second chance with her mother.  She can raise the baby properly and create a better person than Helen was in her past life.  They will have the loving relationship that they never really had before.  All will be right with the world.  Imagine her surprise when she gets to the facility and discovers that Helen has only been regressed to the age of ten, still has all of her memories and, worse, her attitudes.  What follows is a hilarious and slightly scary story of what happens to both women as the years progress.  Think of a slapstick version of The Omen.

Carla Tomaso has a different sense of humor.  It might not appeal to everyone, but that would be a shame.  She takes on some of society’s biggest taboos and twists them, including gender rivalry, infidelity, and murder.  Tomaso approaches the subjects from a decidedly altered viewpoint.  This allows the reader to consider some serious issues while laughing at the situations.  She manages to do this without changing her characters, which many authors would find the normal course.  There is no happily ever after second chance for this mother and daughter.  Elizabeth is always rather hapless in knowing what to do about her mother and Helen never becomes endearing.  Helen managed to ruin the one true relationship in Elizabeth’s life and tries to do it again.  In the end Elizabeth will come to realize what she should have done differently the first time around and that some scientific discoveries should not be explored.

Suspend your sense of propriety.  Feel free to giggle at things that you know you shouldn’t.  Frozen is an enjoyable, if sometimes guilty, pleasure.

Posted by Lynne Pierce at 5:05 PM No comments: 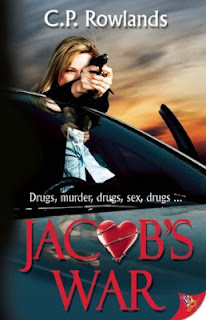 Anyone who suggests to C.P. Rowlands that she should write anything besides an adventure/thriller book should be taken out and punished….harshly.  Her first book Lake Effect Snow was excellent; then she wrote a romance.  Fortunately, she has returned to what she is very good at with Jacob’s War.  She needs to stay in that genre.

Allison Jacob is an ATF agent who is working on a joint task force trying to uncover a drug ring operating around Milwaukee, Wisconsin.  Katie Blackburn is a business owner whose world collides with Allison’s the night she comes out to her car and finds a bloody woman in it.  The woman is one of Allison’s contacts and now Katie finds herself pulled into the investigation.  Katie has a connection to the drug ring that she won’t be aware of until the end of the book, but it leads to her cooperating with Allison to try and find the leader of the gang.  Such a close working relationship leads to a closer romantic relationship, but both women have been hurt before and are reluctant to commit.  Then there is that shadow connection of Katie’s, which could get them both killed.

Most Americans are probably not aware of the serious meth problem going on in the northern Midwest of their country.  Traveling through those states, which most people associate with the dairy industry and healthy living, can be a shock when the numerous signs and postings about the drug situation become apparent.  Rowlands, who lives in Wisconsin, obviously is very informed about the problem.  She’s done extensive research on the drug war and the police procedures involved with trying to combat it.  This gives a feeling of gritty reality to her story.

Rowlands is excellent at creating suspense in her stories and in crafting multidimensional characters.  Neither Allison nor Katie is a simpering, weak woman dependent on the other for her strength.  Most “suspense” stories seem to require that one character fill that slot.  Instead, they are both strong women, with weaknesses.  This makes them fuller and more interesting characters.  Rather than wanting to scream at the silliness so common in some female characters  in this genre, the reader becomes invested in what they are doing.  The reader gets an inkling of what is really going on before the characters do, but this adds to the suspense.  It’s similar to being in a movie theater and yelling at the character not to open that door because the viewer knows that what is behind it isn’t good.  Jacob’s War is a page turner right up to the end.

C.P. Rowlands has done a masterful job in allowing her main characters to develop their personal identities and of capturing the danger of dealing in the drug war.  The cover of the book suits the story perfectly, though the description on the back is a little sketchy.  There is a running tag line on the front cover that says “Drugs, murder, drugs, sex, drugs….”  What should have been added is “suspense, suspense, suspense.” The book is fast paced and draws the reader along.  This is easily a book that can be read in one sitting.  It wasn’t intended that way probably, but putting the book down is difficult.

Jacob’s War marks the much needed return of C.P. Rowlands to the mystery/suspense genre.  Let’s hope she doesn’t forget how to find her way there again.

Posted by Lynne Pierce at 12:59 PM No comments:

A Kiss Before Dawn by Laurie Salzler 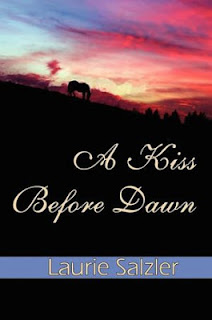 
A Kiss Before Dawn is a romance and a story about horses, two things almost sure to appeal to many people.
Chris Martel works very hard to make her horse breeding business successful.  She devotes her time to her horses, her dogs and her eighty-one year old neighbor, Frances Cook, the only real friend Chris has.  Occasionally she visits a lesbian bar to pick up a woman, but she prefers to be alone and doesn’t make commitments.  Chris isn’t impressed the first time she meets new vet Mary Jo Cavanaugh because Mary Jo is over confident and handles a situation with a horse badly.  Things begin on a rough note, but, with Frances acting as a matchmaker, the women become friends and discover that they have a number of common interests.  A romance grows between them and when a woman from the past tries to wreck vengeance on Chris, it clarifies for the women what they mean to each other.

A Kiss Before Dawn is a standard romance.  The characters are set up, tension arises between them and then it’s resolved.  The two major characters are well defined and there is a lot of information about horses, maybe too much as the plot drags in places.  The flaw in the book is in the pacing.  It meanders along as the relationship develops and covers a lot of information that doesn’t obstruct the plot, but really isn’t necessary.  It might be argued that this is because Chris is slow to trust anyone, but the primary reason seems to be that it adds length to the story.  Then when the crisis arises it appears out of nowhere.  There’s practically no set up and it concludes quickly.  The situation doesn’t ring true and it appears to be there simply to add a stressor to the story.

Anyone looking for a decent story to read and something to pass the time will find this book suits both purposes.  It’s a good example of a first novel and shows enough promise to give the author a try when another book comes out.

Posted by Lynne Pierce at 7:11 PM No comments: