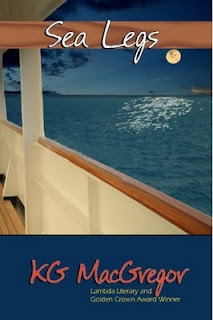 Sea Legs is about the lesson that most people learn as they mature.  Appearances are not as important as what a person is like inside.  Anyone who hasn’t figured that out yet hasn’t finished growing up.

A passenger cruise of the Caribbean is the setting for what happens between six women.  Yvonne and her partner Steph are in a long term relationship that is based partially on their different interests, so each has invited a friend to accompany them on the trip.  While Steph and her friend Natalie are enjoying shopping in the ports, Yvonne and her friend Kelly will participate in the sports they both enjoy.  When Natalie’s ex-lover Didi shows up with her new girlfriend Pamela, Natalie’s agenda changes and she sets out to win Didi back.  Since she and Kelly are sharing a cabin, Natalie enlists her to pretend that they are having a relationship hoping to make Didi jealous enough to realize she’s made a mistake leaving Natalie.  Kelly agrees to this ploy despite her growing attraction to Natalie and then quickly capitalizes on the fact that Didi and Pamela are confined to their cabin by two protracted illnesses.  As Kelly introduces Natalie to activities that she would never have tried otherwise, she hopes that Natalie will realize that there is someone in her future besides Didi.

The theme that runs through this book is appearance and how it can influence people’s perceptions.  Kelly is very androgynous and there is a painful scene as she is boarding the ship when Natalie comments about not being able to tell if she’s a man or a woman.  Throughout the story there are comments about how unappealing Kelly’s appearance is, usually from Didi, and there is a point where Kelly begins to doubt herself.  She’s willing to appear more feminine if she thinks it will attract Natalie to her.  Natalie is just as focused on her own appearance and repeatedly comments that what drew her to Didi was her stylishness and how much Didi did for Natalie to improve her “look.”  The reader quickly understands that Kelly is the much more appealing character because of her kindness and intelligence, which Steph and Yvonne recognize from the beginning, but it takes the other characters a while to reach that comprehension.
Natalie’s character starts out being very superficial, but, as she comes to know Kelly better and opens herself up to new experiences, the reader can see her grow and come to the realization of how shallow she’s been.  Didi is the counterpoint who, with her constant needling of Kelly, practically drives Natalie into a more mature concept of what “attractive” really is.  Didi, who is supposed to be the most attractive and stylish character, is also the most obnoxious.  Her new partner Pamela appears to be rather nice and totally accepting of Kelly, which leaves the reader wondering what either Natalie or Pamela sees in Didi.  Although Didi softens at the end, it’s questionable that she truly understands how silly her attitudes are.

MacGregor’s earlier books show that she’s always been capable of creating a good romance.  As her writing matures however, she’s developing more depth in her characters and complexity to her plots.  The books are still entertaining but have a strength to them that is more appealing.  Sea Legs should make you think as you enjoy it.