The Odd Couple by Q. Kelly 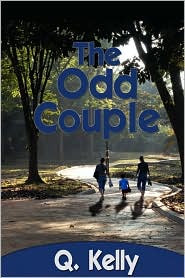 
Morrisey Hawthorne has a secret that she's never shared, even with her family.  Her four year old son Gareth is the product of a brutal gang rape.  She's tried to move on with her life and create something nice for herself and her son.  One day they have a chance encounter with Charlene Sudsbury who is trying to recover from the suicide of her son JP.  Charlene is immediately attracted to Gareth because he looks exactly like her son.  Charlene won't be satisfied until she finds out the truth and it eventually comes out that Gareth is her grandson.  Morrisey and Charlene then build an unlikely relationship, eventually falling in love.  When one of the other rapists turns up he creates an obstacle that may be too big for them to overcome.


Q. Kelly has certainly not written the usual romance.  How many women fall in love with the mothers of their rapists?  This plot twist just seems beyond strange and is bothersome throughout the book.  It would be difficult enough to have a child that looks like the rapist and not let that affect you, but to then have an affair with the woman who raised the criminal is bizarre.  However, if the reader can get past that fact, the rest of the story is fairly routine.  The two female characters are actually likable and then there is a cute kid.  The book itself is well written though there are some mistakes the editor should have caught.

The Odd Couple puts a unique twist in the romance formula.  The reader will have to suspend disbelief to get past much of the plot, but then this fiction.  If the relationship seems acceptable, then the book is fine for some quick reading.
Posted by Lynne Pierce at 10:25 PM