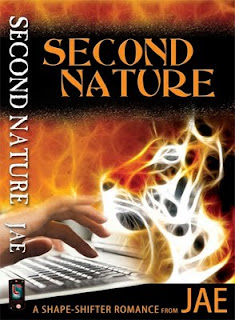 Jorie Price is a fairly successful, although reclusive, writer who is trying to write a  different type of novel and that is giving her trouble.  She's writing about two things she doesn't believe in, shape-shifters and romance.  Her other books were about paranormal fiction and were easy to write, but this one is a struggle. She has no idea how much trouble it is about to cause her.  The Wrasa are real, form an ancient society and they live among the humans trying to keep their existence a secret.  They've heard about Jorie's book and they consider it a threat to them.  Griffin Westmore, a member of the Saru, an elite group of soldiers, is sent on a mission to find out what Jorie knows, how she knows it, and, if necessary, to destroy the book and her.
As Griffin investigates Jorie and forms a friendly relationship with her, she suspects that something more is going on than Jorie trying to reveal the existence of the Wrasa.  Griffin finds herself dealing with family relationships, politics among the shape-shifters and a commanding officer who is intent on seeing Jorie killed.  She's always been a good soldier, but she's not going to follow an order until it makes sense to her.  Jorie and Griffin find themselves being forced to work together as they are pursued by others who don't share Griffin's opinion.  Two women who haven't been able to trust anyone now find that trust is the only thing that may save them and save the future of the Wrasa themselves.
Don't let the size of this book scare you away.  Jae likes to write big books, but the characters are so compelling and the action moves so swiftly that you don't want to put them down.  She takes this story through different levels.  First, there is the intricate dance between Jorie and Griffin as they establish their acquaintance.  Then there is the action and excitement of the chase as everyone seems out to find the women and hurt Jorie.  At the end there is the tension of Griffin trying to prove to the Wrasa that, rather than their destroyer, Jorie might be their salvation.
Second Nature also includes symbolism and raises ethical questions.  The reader can't help but draw parallels between the Wrasa and the history of gays and lesbians, two groups that have been persecuted and forced to hide among the larger society.  As well, Griffin's battle between following orders and what feels appropriate is similar to issues that have been raised in numerous real incidents.  As harsh as the Wrasa's methods may seem, humans aren't let off the hook either with difficult questions being raised about the treatment of other species and the abuse of nature.
Don't be deterred by the fact that this is a paranormal story either.  Second Nature is a complex, yet thoroughly enjoyable tale and the creatures in it are presented in a totally believable manner.  The biggest drawback to the book is that, once you start reading, it's hard to stop and the number of pages guarantees that you can't finish it in one night.  It's worth it though.  Give this book a chance.
Posted by Lynne Pierce at 2:56 AM