Backwards to Oregon by Jae 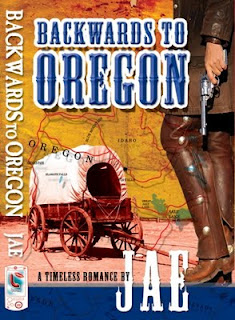 
Backwards to Oregon is the best kind of historical fiction.  It strives to be accurate.
"Luke" Hamilton has lived her life as a man since she was twelve and has had no problem concealing her gender even as an officer in the US Army.  Now Luke wants to head for the Oregon Territory and start a ranch for breeding horses.  Before the wagon train departs from Independence, Missouri she meets Nora Macauley who is supporting herself and her young daughter as a prostitute and something about the woman impresses her.  Though Luke had never considered the possibility of a family for herself she wants to help Nora start a new life and Luke finds herself not only married, but promising to act as a father to Nora's child.  She's able to maintain her charade as a man by saying that this is a business arrangement and that she has no "expectations" for a true marriage from Nora.  As they cover two thousand miles of trail, they learn to depend on each other as they face various threats and the hazards of the wilderness.  Their struggles bring them close together and a deep friendship forms and eventually tries to turn into something else.  When Nora inevitably learns Luke's secret she has to make some serious decisions about her attitudes toward family, marriage and love.  What is really more important, someone who conforms to society's standards or a person who supplies the support and comforts that you really need?  The answer may not be as simple as it seems.
Too often novels try to bend history to fit the needs of the story.  This isn't a problem in Backwards to Oregon.  Jae captures a real feel for what it must have been like to cross the West in the early 1850's.  At all times the real antagonist is the trip itself and the demands it puts on the pioneers.  Hollywood creates the impression that people just piled into wagons and, except for the occasional Indian attack, rode across the prairie and the mountains with very little trouble.  In truth, this was a long and arduous trek that killed many people not from snake bites or accidents, but sheer exhaustion.  The little details, like how to cook a meal and the techniques for crossing rivers, are what give this book authenticity, but the story isn't bogged down by facts.  Another nice touch is that the Indians are not portrayed as vile or blood-thirsty people, but as sophisticated and clever individuals who were perfectly willing to trade for goods rather than staging a massacre and trying to take what they wanted.  The only questionable aspect of the book is that the relationship develops very quickly, but on a trip like this that might have been possible also.
Jae presents a very appealing romance with believable characters and interesting settings.  This is a very entertaining book that is definitely worth reading.
Posted by Lynne Pierce at 7:06 PM